If your country sinks, are you still a country? 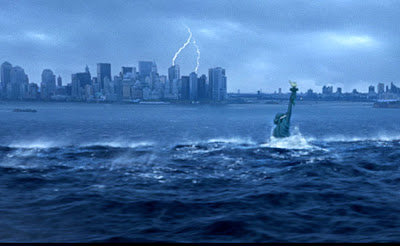 Mark Tran points out some interesting questions that might come to pass if the seas rise, the land masses sink and Algore is right about something here.

And he points to a study by "retired US generals and admirals" here, to bolster his case. The flag officer list:

You can download their report here, but the highlights their sponsor notes:

UPDATE: Having glanced through the report, what strikes me is that these flag officers are applying military course of action analysis to a perceived problem. It's a big "What if..." - as normally seen in developing strategies based on potential enemy capabilities. As they note, it's an analysis drived by projection of "worst case" scenarios, something the military does train you well to do :

Although there is a great deal of agreement among the world’s climate scientists regarding the overall picture of a changing climate, there is also some disagreement about the extent of future changes. Regardless of this continuing discussion, the board’s view is quite clear: The potential consequences of climate change are so significant that the prudent course of action is to begin now to assess how these changes may potentially affect our national security, and what courses of action, if any, our nation should take.

This approach shows how a military leader’s perspective often differs from the perspectives of scientists, policymakers, or the media. Military leaders see a range of estimates and tend not to see it as a stark disagreement, but as evidence of varying degrees of risk. They don’t see the range of possibilities as justification for inaction. Risk is at the heart of their job: They assess and manage the many risks to America’s security. Climate change, from the Military Advisory Board’s perspective, presents significant risks to America’s national security. Before explaining some of those risks, we touch on an
important scientific point.

A global average temperature increase of 1.30F (plus or minus 0.30F) occurred over the twentieth century. But the temperature change on its own is not what shapes this security assessment. Rather, it is the impact that temperature increases can have on natural systems, including:
• Habitats
• Precipitation patterns
• Extreme weather events
• Ice cover
• Sea level

Throughout this report, we do not attempt to tie our findings regarding security implicationsto any one particular projection of future temperature changes, precipitation changes, or sea level rise whether due to ocean expansion or ice sheet breakup. Rather, our goal is to articulate the possible security implications of climate change and to consider mitigating steps the nation could take as part of an overall national security plan.

Fine, as as I snidely comment above, there is also some risk of an asteroid hitting the earth and causing signifiicant changes to habitats, precipitation patterns, extreme weather events, ice cover and sea level. We have some pretty good evidence that things have struck the earth before, causing, as some scientists assert, mass extinction of animal life and other dramatic changes.

We know that things like the potato blight have caused massive waves of immigration. We even know for certain from the geologic record, that the planet has been both hotter and cooler, that big sections of the United States were once covered by oceans or by vast sheets of ice. We know that plagues and diseases running rampant, killing millions. Presumably, we kow that such things can happen again. And, presumably, we should have a concern for each potential disaster.

However, let me sound one note of caution. Most of these events, having the potential to cause untold amount of damage, putting the costs at trilliions of dollars and millions of lives, have exceptionally low probabilities of occurring. Yes, I know that even a .025% chance of trillion dollar (a million million dollar) disaster would justify spending $25,000,000,000 on a project to avert it, however, there is a 99.975% chance that the disaster won't happen, and rounded up - that's virtully no chance. In other words, some "worst cases" are so unlikely that it simply makes no sense worrying about them, even if the law of big numbers makes them look scary. So, where are we with what we know of the odds of the "flag board" scenario? One general says:

Former U.S. Army Chief of Staff Gordon Sullivan enjoys a good debate. But he also knows there are times when debate must stop and action must begin. With respect to climate change, he says that time has arrived. “We seem to be standing by and, frankly, asking for perfectness in science,” Gen. Sullivan said. “People are saying they want to be convinced, perfectly. They want to know the climate science projections with 100 percent certainty. Well, we know a great deal, and even with that, there is still uncertainty. But the trend line is very clear.” “We never have 100 percent certainty,” he said. “We never have it. If you wait until you have 100 percent certainty, something bad is going to happen on the battlefield. That’s something we know. You have to act withincomplete information. You have to act based on the trend line. You have to act on your intuition sometimes.”

In discussing how military leaders manage risk, Gen. Sullivan noted that significant attention is often given to the low probability/high consequence events. These events rarely occur but can have devastating consequences if they do. American families are familiar with these calculations. Serious injury in an auto accident is, for most families, a low probability/high
consequence event. It may be unlikely, but we do all we can to avoid it.

During the Cold War, much of America’s defense efforts focused on preventing a Soviet missile attack—the very definition of
a low probability/high consequence event. Our effort to avoid such an unlikely event was a central organizing principle for our diplomatic and military strategies.

When asked to compare the risks of climate change with those of the Cold War, Gen. Sullivan said, “The Cold War was a specter, but climate change is inevitable. If we keep on with business as usual, we will reach a point where some of the
worst effects are inevitable.”

“If we don’t act, this looks more like a high probability/high consequence scenario,” he added.

“In the Cold War, there was a concerted effort by all leadership—political and military, national and international—to avoid a potential conflict,” he said. “I think it was well known in military circles that we had to do everything in our power to create an environment where the national command authority—the president and his senior advisers—were not forced to make choices regarding the use of nuclear weapons.

“The situation, for much of the Cold War, was stable,” Gen. Sullivan continued. “And the challenge was to keep it stable, to stop the catastrophic event from happening. We spent billions on that strategy.

Well, he's right about one thing. Climate change is inevitable. But there are few things I think need more examination.

For example, "During the Cold War, much of America’s defense efforts focused on preventing a Soviet missile attack—the very definition of a low probability/high consequence event." The efforts were being made to preserve our freedom of action - which was threatened if the "other side" gained a strategic advantage- this was, in my view, a high probability/high consequence event. In short, the Cold War was not largely about preventing a Soviet missile attack. The whole arms race was about trying to gain an advantage or at least maintain parity.

Further, time is not of the essence. The enemy is not at the gate.

Contingency planning is fine, but this is not a time for "When in danger, when in doubt, run in circles scream and shout!"

Reputable scientists have reasonable doubts. So should the rest of us. We may never get 100%, but we can do better than what we have now if we allow for real scientific study and honest debate.
Posted by Mark Tempest at 6/27/2007 09:43:00 AM