Oh what is the word for someone from across the border attacking your forces on your own land? War? What do you call what is allegedly happening along the U.S. border as set out here?

U.S. Border Patrol agents seeking to secure the nation's border in some of the country's most pristine national forests are being targeted by illegal aliens, who are using intentionally set fires to burn agents out of observation posts and patrol routes.
The wildfires also have resulted in the destruction of valuable natural and cultural resources in the National Forest System and pose an ongoing threat to visitors, residents and responding firefighters, according to federal law enforcement authorities and others.
In the Coronado National Forest in Arizona, with 60 miles of land along the U.S.-Mexico border, U.S. Forest Service firefighters sent in to battle fires or clear wild land fire areas are required to be escorted by armed law enforcement officers.
Armed smugglers of aliens and drugs have walked through the middle of active firefighting operations, the authorities said.
***
At least five fires were set below a Border Patrol observation post during the operation in an effort to burn the agents out, according to a Forest Service report. The fires were extinguished, and no one was arrested.
Wildfires are being set by alien and drug smugglers, authorities said, to create a diversion in an attempt to gain undetected access across the border. The fires correspond to a dramatic rise in assaults against Border Patrol agents -- up more than 100 percent over last year.
"Criminal activity by both illegal immigrants and citizens in forests near the border is a threat to members of the public trying to use their public lands and to our employees trying to manage these lands," Tina J. Terrell, a Forest Service supervisor told a House subcommittee in May.
She said law enforcement personnel have been assaulted, threatened with weapons and shot at, and their vehicles have been rammed by cross-border violators. Because of the remoteness of the area, she said, timely assistance from other law enforcement agencies is not always possible and communications limitations and active interference with radio frequencies in Mexico create additional safety risks.
"Even normal enforcement duties bring our officers in regular contact with cross-border violators," she said. "Our officers risk their lives every day to enforce the law in these remote federally managed lands."

I don't know if we have been so reluctant to guard our own people from hostile aliens. I do know, as I posted about in August 2005, that we need to get some people in there to fix the "broken windows" before things get worse. And, as I noted in that earlier post, we used to know how to patrol a border even when the terrain is rough: 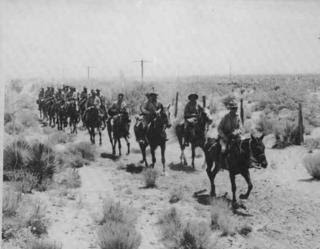