Hugo Chavez and the World of Tomorrow: Venezuela sub force 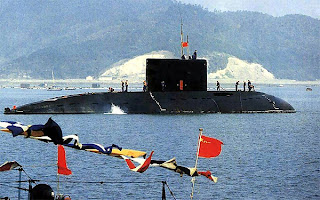 The Russians don't care why- they need a contract see Venezuela mulls purchase of Russian submarines for a Hugo Chavez Crazed Dictator World of Tomorrow saga:

Venezuela is close to striking a deal with Russia on the procurement of several diesel submarines for its Navy, a source in the Russian shipbuilding industry said Thursday.

The South American country has been vigorously pursuing modernization of its naval fleet to counter a possible U.S. blockade of its oil fields and prepare for direct military confrontation with Washington.

"At present, military experts from Venezuela are conducting active consultations with Russian colleagues on the purchase of a large number of submarines," the source said, adding that the number and type of submarines and their delivery schedule had not yet been determined.

He said the negotiations were focused on the procurement of the new Amur-class diesel submarines and Project 636 low-noise submarines with Club-S integrated missile systems.

Meanwhile, Russia's popular Kommersant daily reported Thursday that Venezuela had approached Russia with a request to build nine diesel submarines, five of the Project 636 and four of the project 677 Amur.

The value of the contracts, depending on the final size of the order, is estimated at $1-2 billion, the paper cited its own sources in the defense industry.
***
2005-2006, Venezuela ordered weaponry from Russia worth $3.4 billion, including 24 Su-30MK2V Flanker fighters, Tor-M1 air defense missile systems, Mi-17B multi-role helicopters, Mi-35 Hind E attack helicopters and Mi-26 Halo heavy transport helicopters.

With the addition of arms contracts signed in 2006-beginning 2007, Venezuela has become the world's second largest importer of Russian weaponry after Algeria, which signed arms deals with Russia worth $7.5 billion.

Kommersant said that the submarine deal could be finalized during the visit by Venezuelan President Hugo Chavez to Russia on June 29, prior to President Vladimir Putin's visit to the United States.

The submarine contract, if concluded, could become an additional irritant in the already testy relations between Moscow and Washington, the paper said.