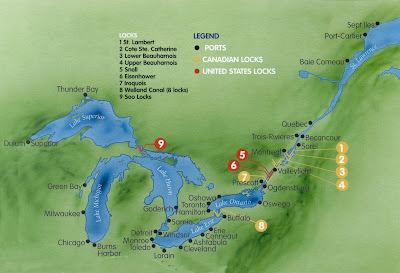 Just an interesting Saturday evening read about a waterway that allows ocean shipping to transit all the way to Duluth, Minnesota via a series of locks. Go to Great Lakes St. Lawrence Seaway System and click around for the story of an mazing engineering feat.

Details of the map: The St. Lawrence Seaway proper extends from Montreal to Lake Erie. The Montreal/Lake Ontario section encompasses a series of seven locks over roughly 300 kilometres (187 miles) – five Canadian and two American – from Montreal, Quebec to Iroquois, Ontario enabling ships to navigate between the St. Lawrence River and Lake Ontario. The Welland Canal links Lake Ontario and Lake Erie with a series of eight locks over approximately 42 kilometres (27 miles) – all Canadian. The Welland Canal provides more than half the lift needed between tidewater and the lakehead. All of the seven locks of the Montreal/Lake Ontario section of the Seaway (St. Lambert, Côte Ste. Catherine, Lower and Upper Beauharnois, Bertrand H. Snell, Dwight D. Eisenhower and Iroquois) as well as those of the Welland Canal, are 233.5 metres long (766 feet), 24.4 metres wide (80 feet) and 9.1 metres deep (30 feet) over the sill.Further to the northwest are the Soo locks at Sault Ste. Marie, Michigan, which provide a vital connection between the upper Great Lakes and Lake Superior. Access to Lake Superior and the Canadian lakehead at Thunder Bay, Ontario and the U.S. lakehead at Duluth, Minnesota is gained via the locks on the St. Mary’s canal, which are administered by the U.S. Army Corps of Engineers.The two locks currently operational for commercial navigation purposes are the Poe and the MacArthur. The Poe lock is 1200 feet long (366 metres), 110 feet wide (33.5 metres) and 32 feet deep (9.8 metres). The MacArthur lock is 800 feet long (244 metres), 80 feet wide (24.4 metres) and 31 feet deep (9.4 metres).

A ship in the Eisenhower lock: 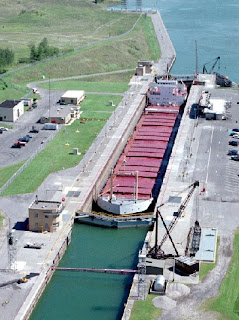 Of course, there is this famous crash:


The Windoc freighter is stopped dead in its tracks at the Welland Canal when the bridge crashes down on top of the ship before it passes through. Its wheelhouse, the nerve centre of the grain ship, is sheered off, and the vessel veers out of control until the crew drop anchor. However, the danger is far from over. In this CBC Television clip, amateur footage shot by a local resident captures the ship bursting into flames.

An overnight struggle begins as firefighters work to keep the fire from reaching the fuel tanks and prevent an explosion. The next morning, the fire still burns, as the Canal is blocked by the crippled, smouldering ship. Local residents suspect human error on the part of those operating the Canal. “I don’t know how you don’t see a laker like that coming. It’s just beyond me,” said John Crooker, the man who shot the amateur footage.

More videos at this CBC site.