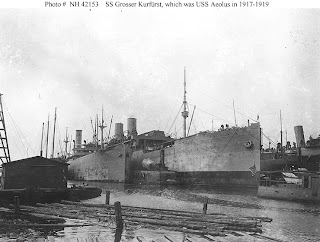 Before aircraft became widely used to transport soldiers to arenas of combat, troop movements were handled by ships.

In World War I, some of the ships the United States used to transport its soldiers and Marines across the sea were formerly "interned" (see here) German ships, including the world's fastest passenger liner, Kaiser Wilhelm II (II) (see also here) (which became USS Agamemnon):

But the outbreak of war came at a very bad moment for Germany. Not many of the nation’s vessels managed to get back to Germany for conversion, and were instead interned in foreign ports. One of the greatest losses was surely HAPAG’s brand new 54,000-tonner Vaterland, which was interned in New York. But also two ships of the Norddeutscher Lloyd express quartet soon found themselves in foreign hands. The Kronprinzessin Cecilie was interned in the port of Boston after a dramatic game of hide-and-seek on the North Atlantic, and the Kaiser Wilhelm II was retained at her NDL pier in Hoboken, New Jersey. 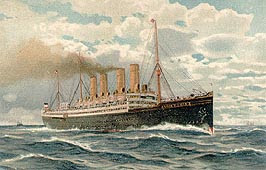 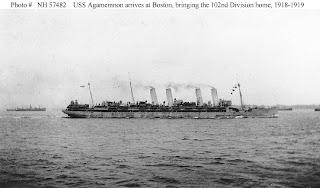 And in New Jersey she remained, the Germans probably figured that an American port was quite a safe place for one of their finest ships. But after three years of fighting in Europe, the United States entered the war. This was indeed a terrible blow for Germany, who now saw all their American-interned ships seized and used against them. The Kronprinz Wilhelm had by now also been interned in the US after a successful raiding cruise of the seas.
The Kaiser Wilhelm II was of course no exception to the rules of war. In April 1917, she was seized for use as a troop transport, and was renamed USS Agamemnon for this purpose. Now fighting her creators on their enemies’ side, she started doing trooping duties between America and Europe.

Of course, the Germans sought to resist such conversions to the allied cause, and some ship crew were equipped with "scuttling charges." 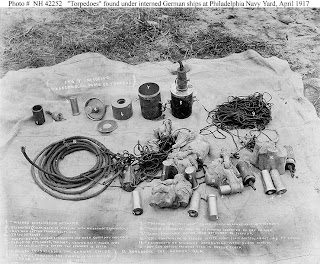 Explosive "Torpedoes"- Found under the interned German ships Prinz Eitel Friedrich and Kronprinz Wilhelm after they were seized by the United States in April 1917. Photographed at the Philadelphia Navy Yard, Pennsylvania, 12 April 1919. These devices, shown here disassembled with components labeled, were placed by the ships' German crewmembers in anticipation of the seizure, in hopes of disabling the ships and thus rendering them useless to the U.S. U.S. Naval Historical Center Photograph.

During the First World War, the U.S. Navy's Transport Force (also called the Cruiser and Transport Force) employed forty-five commissioned ships to transport American service personnel across the Atlantic to the European combat zone. One of these was an older ex-commercial steamer that had been in Navy hands since the early 1900s. Another had been specifically built as a U.S. Navy transport. The rest were former merchant passenger liners, sixteen of them German vessels that had been laid up in U.S. ports since the great conflict began in 1914. 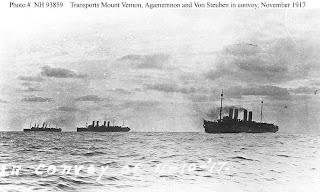 Three of the wartime Navy transports were lost during 1918, two (President Lincoln and Covington) in mid-year due to enemy action and one by accident at year's end. Another left U.S. Navy service shortly before the fighting ended. In the months following the 11 November 1918 Armistice, eighty more former merchant-type ships joined the Navy's commissioned transport force to help expedite the homecoming of the more than two million Americans who had served in Europe. Nine of the eighty were passenger liners laid up in Germany during the conflict. Seventy-one came from other sources, among them over twenty passenger liner types (two of them hospital ships), one coastal passenger steamer, four former minelayers and forty-five austerely converted freighters.

A rather remarkable collection of information and links to various ship types used in WWI transport of U.S. troops can be found here. 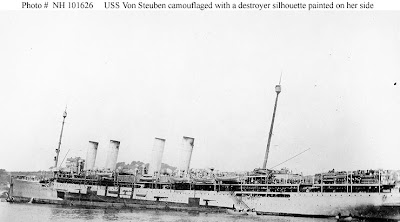 One of these pictures shows an interesting camoflauge paint scheme on USS Von Steuben (ex-German S.S. Kronprinz Wihelm) described as:

Photographed during World War I. Note her odd camouflage scheme: a destroyer silhouette painted on her side.

Such paint schemes did not stop German U-boat attacks. The photos that follow were taken after USS Mount Vernon was torpedoed, and put into to drydock in Brest, France. 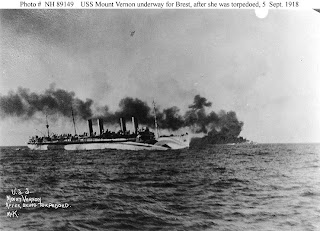 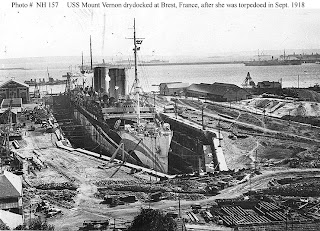 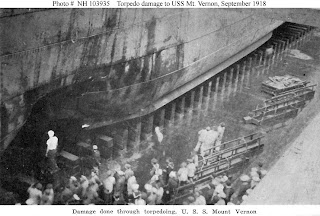 Of the crew shown in the following photo, thirty-six men were killed in the attack.

Others were wounded, as seen in the final photo. 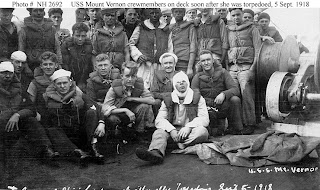 All of those who served in these troop transports deserve a salute.