Last summer’s war between Hezbollah and the IDF culminated in the longest sustained rocket attack since the Iran-Iraq War of the 1980s. During the first two weeks of August 2006, an average of 200 Hezbollah rockets slammed into targets in northern Israel each day. All told, in some 30 days of hostilities, 3,970 Hezbollah rockets exploded in northern Israel killing 43 civilians and severely wounding another 250. Despite the fact that the IDF/Air Force was able to destroy almost all of Hezbollah’s medium- and long-range missile launchers in the opening days of the

The U.S. Missile Defense Agency (MDA) apparently agrees and is funding work on the David’s Sling Weapon System (DSWS), a new Short Range Ballistic Missile Defense (SRBMD) cooperative program between the U.S. and Israel. According to the MDA’s February 2007 Research and Development, Test and Evaluation Budget Item Justification, “the summer conflict between Israel and Hezbollah underscored the strategic effect of short range, inexpensive ballistic missiles attacks on civilian populations. The current Israeli Missile Defense Architecture (comprised of Patriot and Arrow) has capability against some of these short-range missile threats but does not provide a cost-effective defense. The goal of DSWS is to provide a lower cost ($350K per missile) defense capability (as compared to the $2-3M per Arrow or Patriot missile). With the completion of the Joint Feasibility and Risk Reduction study, the David’s Sling Weapon System is beginning Full Scale Development.”
***
The United States and Israel also co-developed the Tactical High Energy Laser (THEL) 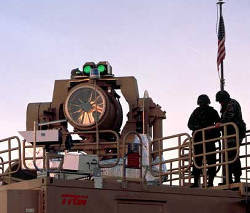 throughout the 1990s, which uses a chemical laser to destroy airborne targets. In a series of tests conducted between 2002 and 2004, THEL successfully destroyed artillery shells, mortar rounds, and a salvo of 25 Katyusha rockets in flight. Despite the low-cost-per-kill ratio (approximately $3,000 per shot) THEL received no funding for development or production since 2004 in either the U.S. or Israeli defense budget. The system did incur substantially increased R&D costs associated with American efforts to make the system smaller and more mobile. None of these ‘problems’ would be of any concern to Israel however, where but five permanent systems could conceivably protect all of northern Israel from attack. According to a September 5, 2006 report on the matter by James Jay Carafano, a Senior Research Fellow for National Security and Homeland Security at the Heritage Foundation, THEL could be produced in as little as 18 months at a cost of $150 million, and additional systems would be far less expensive once full-scale production started.

UPDATE: Thanks to "Worker" in the comments, a YouTube link: