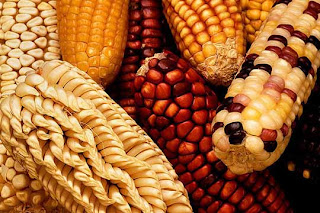 At least I hope the consequences are unintended. From The American Spectator:

Feel like you're getting squeezed by prices at the gas pump? Get ready to experience that same feeling at the grocery store. As ABC News reported recently, average food retail prices of across the United States have risen by 4 percent during the past year alone. Beleaguered American consumers must now pay record gas prices to get to the grocery store, where they again meet sticker shock. And who is to blame? Not grocery stores or food producers, but Congress.

Food prices today are rising steeply because Congress decided to link the price of food with the price of oil. As a result, now whenever the price of oil increases, food prices follow. Worse still, Congress is currently contemplating further tightening this link. Let us explain.

This mess started in 2005, when Congress passed that year's Energy Policy Act, which mandated the incorporation of 7 billion gallons of corn-based ethanol into the American fuel supply in an effort to reduce gasoline consumption. Ethanol production, suddenly buttressed by a federally guaranteed demand for its product, overnight became an extraordinarily profitable venture.

Invariably, a market disruption of this magnitude is at once unpredictable and consequential. Congress likely did not then foresee that the artificial demand for ethanol created by this mandate would cause a sharp increase in the price of groceries. Such, however, is the nature of meddling in the market.

Before the 2005 Act, the American farmer sold corn that was for the most part eaten, either by people here and abroad or by livestock. But the new ethanol mandate suddenly gave American corn growers a vast new customer base -- everyone who owns a car. Of course, a precipitous increase in demand will have an effect on price; accordingly, a bushel of corn that cost $2.00 two years ago, costs close to $4.00 today.

The effects of this price increase have been profound. As it turns out, corn is integral to a huge array of groceries. Corn syrup is widely used as a sweetener, because sugar is too expensive and there are health fears about artificial substitutes. And, of course, corn goes into lots of baked goods. Of particular significance, corn is the primary feed for livestock; there are no substitutes with a comparable nutritional value. Consequently, as the price of corn increases, it costs more to feed cows, pigs and chickens. These costs are then passed along to the consumer, who pays more for dairy, meat, eggs, and all the derivatives thereof.

Unfortunately, the collateral damage wrought by ethanol mandates does not end there. With corn hovering at record prices, farmers have found it more profitable to grow corn, thus leaving less land available for the production of other grains, reducing their supply. The prices of grains and grain byproducts, like bread or pasta, increase accordingly.

The upward trend in grocery prices is unlikely to end. With the Chinese and Indian economies growing, demand for crude oil remains robust. American refinery capacity is strained. Supplies, moreover, are always subject to disruptions due to turmoil in political hotspots like the Middle East, Venezuela, and Nigeria. Indeed, we are already gearing to pay $4.00 a gallon.

So what does Congress plan to do? Not help consumers. Disconcertingly, Congress is now mulling an enormous expansion of the ethanol mandate, potentially to 35 billion gallons -- a five-fold increase of the current mandate. This situation may be about to get worse.

Ethanol mandates were a miserable, poorly thought out exercise in 2005, and they remain so today. They hold the American consumer's grocery budget hostage to the Byzantine and murderous politics of the Middle East. Far from promoting energy independence, Congress has put the House of Saud in control of your grocery bill.

Some previous posts on this topic here, here, here and here.

I wonder how many voters raise corn. If this keeps up, I've got a little space in front yard...

UPDATE: Some say that corn prices will stop rising at some point (nice, after having doubled) as set out here:

Consumers will feel the impact of higher corn prices, not just in the produce isle but in a range of products. Beef and poultry prices are likely to rise as animal farmers rely on corn for feed. Soft drink prices may also jump since drink makers widely use corn syrup as a sweetener.

"Four dollars a bushel causes a lot of pain," said Richard Lobb, a spokesman for the National Chicken Council, who estimated that the price rise has already bumped up wholesale chicken prices 6 cents per pound. "It ripples right across the economy."

Not everyone sees those ripples becoming a tsunami though.

"I see some cooling in the corn market over the next 12 to 18 months," said Cristoph Berg, a managing director at the German-based commodities research firm F.O. Licht.

"It would be truly historic to have grain prices stay so high for so many years," said Ryan Davies, a trader at Titan Commodities in San Diego. "I think they will maintain a high level, but there is a cap as to how high they can go."
Chicken Little scenario?

Simple economics is the main reason cited for debunking the "corn-out-of-control" scenario.

As the price of corn rises, farmers have greater incentive to plant more of it and increase supply.

Terry Roggensack, a grain specialist at the Hightower Report, a commodities newsletter, is seeing farmers planting between 6 to 10 million more acres of corn this year on top of last year's 78.3 million acres.

He says farmers need to plant near the top end of that range to meet projected demand. If they underproduce, corn prices could be set to rise even more.

With corn at around $4 a bushel, ethanol producers could be forced out of business - if corn prices keep climbing, while ethanol prices hover at around $2 a gallon.

"If corn prices are beyond a certain threshold, many [ethanol] plants will just stop producing," said Berg. That will cause a drop in demand for corn which would send prices down.

The Bush administration isn't too concerned about corn prices jumping.

A White House spokesman told CNNMoney.com that if the proposals outlined in the State of the Union make it into law they will be sure to include a safety valve, which would suspend the mandatory ethanol requirement if corn prices rose too high.
Corn: Not the only ethanol solution

No one spoken to, including representatives at the White House, believes that the president's call for mandatory alternative fuel use to grow - from 7.5 billion gallons currently to 35 billion gallons by 2017 - will be achieved through corn ethanol alone. The United States currently uses about 140 billion gallons a year of gasoline.

Experts say corn ethanol could account for maybe half of that without sending the price of corn even higher.

The remaining amount of alternative fuels could come from other sources and technologies, like turning coal to liquid fuel (a process derided by environmentalists) and cellulosic ethanol, a nascent but promising technology that produces ethanol from any plant matter, not just food crops.

Still, these assurances do little to calm farmers currently struggling to feed their livestock due to the high price of corn.

"That's the optimistic view, that [the spike in corn prices] is going to stop right there," said the National Chicken Council's Lobb. "It's already doubled the cost at seven and a half billion gallons [of ethanol production], it's inconceivable to think that adding more wouldn't raise the price."

I say let's investigate the "excess profits" being earned by corn farmers.

And some stuff on cellulosic ethanol here, which is not ready for prime time.

A recent study conducted by the Center for Agricultural and Rural Development at Iowa State University (which receives funding from grocery manufacturers and livestock producers) reported that U.S. ethanol production could consume more than half of U.S. corn, wheat and coarse grains by 2012, driving up food prices and causing shortages. The study estimates that booming ethanol production has already raised U.S. food prices by $47 per person annually. In Mexico, protests have already erupted over the high price of corn tortillas, a staple food in the local diet.

Planting more corn is one solution, but that means planting less of other crops that are also widely used in foods, such as soybeans and wheat. Tilling fallow land could create more growing space for corn, but might lead to soil erosion and impacts on wildlife habitats.

According to a December 2006 study by the International Food Policy Research Institute, producing enough ethanol to fuel all of the world’s vehicles would require five times more corn than is planted today and 15 times as much sugar cane.

A more promising solution is to make ethanol from cellulose instead of starches and sugars—using plants such as switchgrass and organic waste instead of corn and sugarcane. This would also reduce greenhouse gas emissions much more effectively than making ethanol from corn.

Growing switchgrass in large quantities would probably require taking some other crops out of production, which would create challenges for farmers. The more attractive alternative is to make ethanol from waste materials such as leftovers from logging and paper mills. However, cellulosic ethanol is not expected to become economically competitive with corn-based ethanol until scientists can develop enzymes that are more efficient at breaking down woody plants. The federal government is funding research aimed at making cellulosic ethanol commercially viable, but many technical issues still need to be worked out.

For now, whether corn is used to make food or fuel depends on economic factors such as the fluctuating price of oil. When oil prices are high, demand for ethanol goes up. That helps keep your costs down at the pump, but you may pay more for steak and corn chips.