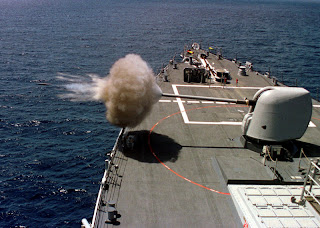 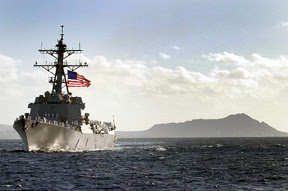 According to this, USS Chafee (DDG-90) undertook some Naval Surface Fire Support off Somalia - going after a suspect in the bombings of U.S. embassies in 1998:

The destroyer USS Chafee fired her deck guns at two or three suspected "high-value terrorist targets" in the Puntland area along the northern coast of Somalia on Saturday, U.S. officials told NBC News. The suspects are accused of taking part in the 1998 bombings of the U.S. embassies in Kenya and Tanzania.

According to the officials, the U.S. had "actionable intelligence” gathered by U.S. Special Operations Forces and local tribal leaders that the suspects were in the area.

Note that the operation was along the Puntland coast. 20 5-inch rounds (off Vietnam we'd have considered that "warming up the guns"). No BDA yet, though I suspect the international whining has already begun.