This post is a variation on this post at Milblogs that is part of a friendly discussion about pirates, combatant ship levels and other matters.

Part of that discussion involves when it might be acceptable to violate international law and pursue pirates into another country's territorial waters. CDR Salamander has asserted (at the aforementioned Milblogs and on his own site) that since Somalia is unable to control its own waters and the pirates who operate therein and out of them, that is should be permissible to engage in "hot pursuit" of such pirates and enforce the law for the Somalis.

I, on the other hand, don't believe that the decision to violate even an toothless international law ought to be left up to a CO facing a crisis, but should be made ahead of time, especially if your purpose in being where you are is to "hunt pirates."

If you know you are going "hunting pirates" that the skids should be greased for "hot pursuit" well before you find yourself facing a captured merchant ship with hostages. Lay the diplomatic foundation first or announce ahead of time that which Salamander suggests - that due to Somalia's inability to control its own waters, others will step in as needed. I can see no reason why such a decision should be left a CO to make on the spot. Although, if it was- then I think in this case the CO of Carter Hall made the right call.

I vigorously disagree that once hostages are taken in a situation in which a pattern has been established that it may be better to take the risk of having the hostages killed rather than let them be kept by the pirates awaiting ransom. I am certain that if I were one of the Danish crew of Danica White I'd appreciate you not making your point of defending freedom of seas with my life.

Which leads me to my real point, which is one of prevention of ship captures instead of the tail chasing "hostage rescues." To that end:
If I were the "anti-pirate" king, I'd offer up a voluntary convoy system for shipping entering into what long has been labeled a "danger zone" off Somalia. If no one on active duty remembers how to do convoy ops, I still remember how from my days in Naval Coordination and Protection of Shipping (or whatever it is now known as) and will volunteer to come back and help work the problem, though I also know that many NATO forces still have both the personnel and knowledge to do it if asked/tasked. In a similar vein, I have long argued for escorting UN food ships headed to Somalia. I am amazed that the UN has not sought coalition help in getting food to the thousands of starving innocents whose lives are threatened by these pirates.

A little forehandedness would go a long way in preventing ship captures.

Speaking of which, I understand the small ship shortage issue. I fail to see how sending lumbering amphibs (no disrespect intended) without other, faster, more appropriate assets is helping the problem. Why there aren't a a few Intermarine MV85s operating with an LSD is beyond me. Or why there aren't 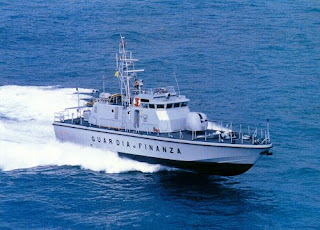 armed helicopter assets to respond to distress calls before a ship is taken by pirates?

Let me plan the next "pirate troll" and I promise to come back with scalps. But first let me take care of the handcuffs of international law and have access to something other than low speed high drag ships armed, essentially, with popguns. If we are serious about hunting pirates and terrorists at sea, let's develop a "hunter-killer" group armed with proper tools.

Went through Chinfo's alphabetical list of U.S. Navy ships and culled out the USNS, MV, submarines, minesweepers, amphibious ships and cruisers to get to the numbers of "destroyers" and "frigates" and "coastal patrol" ships. There are 86 ships listed below, 9 of which are PCs the remaining 77 being DDG or FFG.

I'm sure the list is probably not completely accurate, but assuming 1/3 deployed, 1/3 in workup or standown and 1/3 in yard or RAV, there's a lot of ocean being "covered" by too few ships.

We should be spending some serious money on small ships like the aforementioned MV85s and developing a "sea base" mothership (gee, like a destroyer tender?) for ops like pirate hunts and other littoral fun.