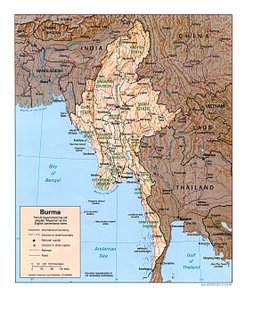 Burma is one of the world’s poorest countries yet it has an army four times larger than that fielded by Britain, the world’s fifth richest country. Shouldering all those rifles and manning armored vehicles are at least 400,000 Burmese troops, double the size of neighboring Thailand’s army.
***
The arms purchases suggest a grave external threat. Yet what that might be is hard to fathom. The state-controlled press has in recent years warned of an American invasion, ordering troops, militia and the public to take heart from Iraq and prepare for guerrilla resistance.
***
Highlights include 1,000 BTR-3U infantry fighting vehicles based on an old Soviet design, which Burma ordered from Ukraine in 2003. Their capabilities are roughly equal to the American Bradleys or British Warriors now on duty in Iraq.

Burma’s navy is also expanding, buying small combat vessels from China to complement ships being built in yards near Rangoon. Electronics and weapons come from the usual scrum of suppliers based in China, Russia, North Korea, India, Israel, and say some reports, Italy.

Above those ships and tanks Burma’s air force flies at least a dozen Russian MiG 29s, among the world’s best combat aircraft, along with dozens of older make-do Chinese fighters, plus dozens of simple but tough Polish and Russian multi-purpose helicopters adept at moving troops or attacking with machine guns and rockets.

And, of course, oil and gas are in the mix:

China’s official media reported in April that preparations were underway for a $2 billion gas pipeline from Sittwe, where offshore oil and gas is brought ashore, to Kunming in Yunnan, which followed an understanding reached between PetroChina and Rangoon in December 2005.

That pipeline will run through parts of the Shan State that have in the past been controlled by rebel armies and are still within striking distance of groups pressed up against the Thai border. A parallel oil pipeline is a distinct possibility. China is also negotiating transit rights for trade across Burma via road, rail and river that will run along the same corridor as the pipelines to Andaman Sea ports.

Protecting and patrolling this lucrative infrastructure is one mission where fighting vehicles and even tanks could be useful in deterring fading guerrillas and reassuring China. They may also provide security for onshore oil fields, which seem set to expand on the back of exploration wells drilled by Chinese firms.

It is a similar story offshore where Burmese, Chinese, Korean and Indian firms are investing heavily in substantial oil and gas fields. Their security, principally against pirates, requires warships and surveillance aircraft, but that alone cannot justify the ongoing naval expansion.