Comments from a public meeting on the concept described as

The French company Suez has applied to build two offshore terminals to allow tankers to unload natural gas into a pipeline, which would send it to Florida's power plants. The terminals, supported by buoys, would be 8 and 10 miles off shore. The meeting was held by the U.S. Coast Guard to help prepare an environmental impact statement.
***
Under the proposal, the gas would be loaded onto the ships in West Africa, Trinidad and Tobago, Norway or other producers. The gas would be cooled to 260 degrees below zero, transforming it into a liquid and compressing it to one-six hundredth the volume of the gas, making it easier to transport.

Upon arrival at the port off Fort Lauderdale, the ships would have two options. They could connect to the buoy system, transform their cargo back to gas and ship it through the pipeline. Or if they're unable to regassify the fuel themselves, they could transfer it to a special ship that would be permanently stationed at the port, which would transform it to gas and send it through the pipeline.

As reported here, some people are not happy even if the terminal might be 8-10 miles off shore and, undoubtedly, virtually invisible to them:

Susan Peterson, of Fort Lauderdale, expressed concern about the security of the enormous tankers, saying the state should pursue solar energy instead.

"It's a bad idea because it's a terrorist target," she said. "I don't see how this kind of floating barge with volatile horrible fuel could be secured unless they have snipers on it."

I'm not sure if the fuel or the snipers bother her more... 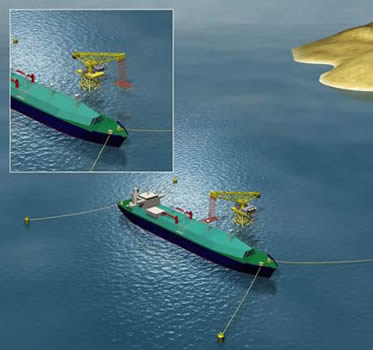