The UIC mob, er, "militia" gets bumped back 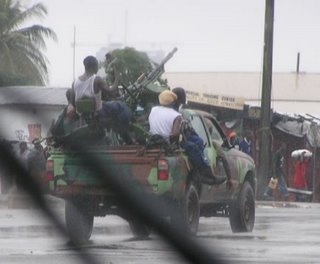 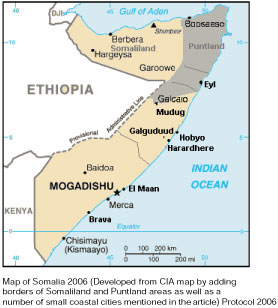 Somalia's Islamist militia are reported to have withdrawn from frontlines after a sustained assault by government forces backed by Ethiopian troops.

Whether this a "retreat" or a tactical withdrawal seems to be up in the air. It should be noted that the UIC forces are not armor or artillery heavy, but relatively lightly armed infantry mounted, if at all, in "technicals" - those SUVs with large caliber machine guns or recoiless weapons mounted on them. See here.

Of course, that could change,

Islamist fighters are also reported to have withdrawn from other areas in central and southern Somalia.

But a leading UIC official, Sheikh Sharif Sheikh Ahmed, told reporters in Mogadishu that the retreat merely signalled a new phase in the war.

"Since Ethiopia started using air power and heavy artillery, we have changed our tactics and are getting ready for a long war," he said.

I wonder who might supply the UIC with tanks, artillery, etc?

More background here and here, both from the Council on Foreign Relations. And an earlier post here. UPDATE3: More here, along with reports on the fighting:

Ethiopia's prime minister announced Sunday night that he had sent troops into Somalia to fight international terrorists, defend Ethiopian interests and prop up the besieged U.N.-backed government, which only has a very small military force.

But Meles has said he does not intend to keep his forces in Somalia long, perhaps only a few weeks. He has told visiting dignitaries that his goal is to severely damage the Islamic movement's military capabilities and allow both sides to return to peace talks on even footing.

Meles said he would not send troops into Mogadishu, but instead encircle the city to contain the Islamic forces.

UPDATE: In fact, a UN approved embargo of ships and aircraft carrying heavy weapons to Somalia might be in order...

UPDATE2: "A Reckless U.S. Proxy War?" Doesn't seem all that reckless to me, considering what's at stake. And, no, I don't care if the UIC have made the trains run on time...(Updated thought: Why not "A Reckless al Qaeda Proxy War?" or fill the enemy of your choosing)

A "first report" here (take it for what it's worth). And famine concerns raised here:

The Famine Early Warning Systems Network (FEWS NET) has warned of potentially "catastrophic" effects of all-out war in Somalia. In an emergency alert issued on Friday as the conflict began to escalate, the analysis service highlighted the food security threat to southern Somalia, where 1.1 million people are already facing a humanitarian crisis while half a million are seriously affected by floods.

War is rarely healthy for growing things, but I wonder if the luxury of food supplies being brought in from outside has allowed the UIC and other factions to get a little reckless in their actions? Just a thought.

UPDATE4: Photo of the "technical" is fom Liberia, but the concept is the same.
UPDATE5: Bill Roggio has more:

...Sheik Ahmed giving reasons to their retreat and lose [NB E1: loss?] of towns said. “Since we have no heavy weapons we would start endless hit and run fighting against the Ethiopian invaders... We are again telling the international community that we (ICU) have no links with Al-Qaeda and there are no terrorist members in our country, here we have Somalis who stoop up for restoring their peace and security nothing else,” said Sharif.

The Islamic Courts appears to be surprised by the quick advance and ferocity of attacks by the Ethiopian and TFG forces, as the hasty withdrawal from important towns, and abandoned critical weapons systems.