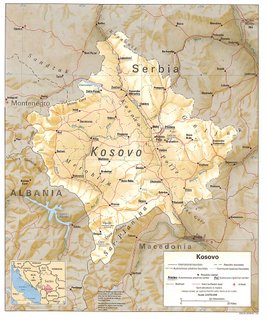 Kosovo, that happy valley off in the Balkans that requires the continued presence of NATO forces and vast sums of EU money to keep operating, may find shaking itself loose from Serbia a tad harder, as reported here:

Russia's ambassador to Serbia Alexander Alexeyev said Monday that Russia would use its veto within the United Nations Security Council to block any decision supporting independence for Kosovo.

Alexeyev told B92 radio in Belgrade that any solution on Kosovo's status must be acceptable to both the ethnic Albanian majority of the breakaway Serbian province and the government in Belgrade.

He also criticized UN envoy Martti Ahtisaari for saying that a negotiated compromise between Belgrade and the Kosovo Albanian side was not possible.

The Serbian Government wants to maintain sovereignty over the province, which has been administered by the UN since 1999. The Albanian majority in Kosovo is pushing for full independence from Serbia.

There are currently some 16,000 KFOR troops in Kosovo trying to keep the remaining Kosovar Serbs in place and alive.