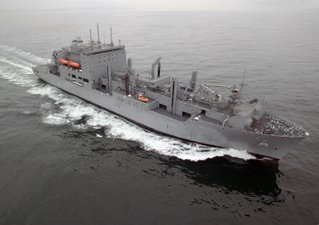 A dry cargo/ammunition replenishment at sea ship named for astronaut RADM Alan Shepard is christened, as set out here:

Shepard graduated from the U.S. Naval Academy in Annapolis, Md., in 1944. He served aboard destroyers in the Pacific during World War II and later entered flight training, receiving his designation as a naval aviator in 1947. Shepard served several tours in fleet squadrons and was selected to attend the Navy Test Pilot School in 1950. He logged more than 8,000 hours of flying time.

In 1959, Shepard was one of seven men chosen by NASA for the Mercury manned space flight program. Two years later, he became the first American to journey into space in the Freedom 7 spacecraft launched by a Redstone rocket on a suborbital flight. He reached an altitude of 116 miles.
***
The USNS Alan Shepard is the third ship in the Navy's new 11-ship T-AKE 1 Class. T-AKE is a combat logistics force vessel intended to replace the current capability of the T-AE 26 Kilauea-Class ammunition ships, T-AFS 1 Mars-Class combat stores ships and, when operating with T-AO 187 Henry J. Kaiser-Class oiler ships, the AOE 1 Sacramento-Class fast combat support ships. To conduct vertical replenishment, the ship will support two military logistics helicopters.

Designed to operate independently for extended periods at sea while providing replenishment services to U.S., NATO and allied ships, the USNS Alan Shepard will directly contribute to the ability of the Navy to maintain a worldwide forward presence. Ships such as Alan Shepard provide logistic lift from sources of supply either in port or at sea from specially equipped merchant ships. The ship will transfer cargo (ammunition, food, limited quantities of fuel, repair parts, ship store items, and expendable supplies and material) to ships and other naval warfare forces at sea.