Four Arabs condemned to death over US ship attack in Jordan \ 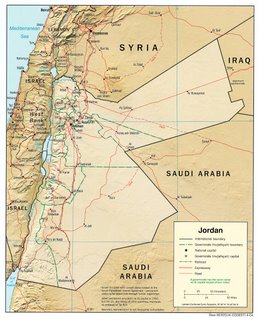 Remember the harassing rocket attack on 2 U.S. Navy amphibious ships in Jordan back in August of 2005? Well, the trial results are in and Four Arabs condemned to death over US ship attack in Jordan:

A Jordanian military tribunal has condemned to death three Syrians and an Iraqi over a rocket attack on US warships last year that killed a Jordanian soldier.

Three other Iraqi citizens were sentenced to 10 years in jail, one Syrian and a Saudi-born Jordanian were given prison sentences of two years, while three Syrians were acquitted, an AFP correspondent said Thursday.