Somali Islamists at "war" with Ethiopia 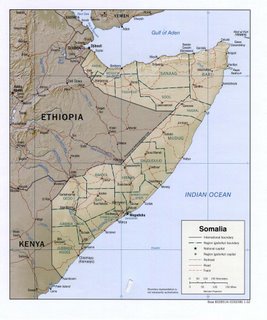 I guess the world had a shortage of wars this year, so the Somali Islamists have stepped forward to help boost the numbers by declaring a state of war with Ethiopia, as set out here:

The leader of the Union of Islamic Courts (UIC), which controls much of southern Somalia, says the country is in a state of war with Ethiopia.

"All Somalis should take part in this struggle against Ethiopia," Sheikh Hassan Dahir Aweys said from Mogadishu.
***
Both sides have blamed each other for the fighting.

The UIC has introduced law and order to the capital and much of southern Somalia for the first time in 15 years and denies links to al-Qaeda.

Ethiopia has admitted to having some military trainers in Somalia, but our correspondent says that as he drove to the airport in Baidoa on Wednesday, he was stopped by a huge convoy of Ethiopian military armour.

The United Nations estimates as many as 8,000 Ethiopian troops may be in the country backing the government while regional rival Eritrea has deployed some 2,000 troops in support of the Islamic group.

Experts nevertheless warn that renewed war in Somalia remains a risk and fighting could draw in its neighbors, including Eritrea and Kenya. A recent U.N.-commissioned study said that numerous nations already were sending fighters and guns to fuel the conflict.

"Everyone who knows something about Somalia knows that a real fight could easily spread to the region," said Mario Raffaelli, Italy's special envoy for Somalia.

Ethiopian and U.S. officials accuse the Islamists in Somalia of having links to terrorism and say the courts union seeks to install a Taliban-style regime. In her most blunt assessment yet, Assistant Secretary of State for African Affairs Jendayi E. Frazer last week accused the Islamic union of being controlled by "East Africa Al Qaeda cell individuals."

Islamists dismiss such allegations as Western propaganda, though some concede that the union is struggling to strike a balance between its moderate and fundamentalist factions. One extremist sect is accused of masterminding the September killing of an Italian nun in Mogadishu.

Nothing like regional war just in time for the holidays.

It is worth remembering that the Somali UIC doesn't speak for Puntland or Somaliland, nor for some portion of the clans of the south of Somalia. On the other hand, piracy off the coast of Somalia seems to be way down.

I suspect Kenya, Somalia's southern neighbor, is looking at gearing up just in case. The EU is gathering funds for Somali refugees:

The European Commission has allocated €2 million in humanitarian aid to support the rising number of Somali refugees in Kenya.

Since the beginning of 2006, Kenya has seen a steadily increasing refugee influx from Somalia.
Each day around 1,200 Somali refugees arrive currently in Kenya. The office of the United Nations High Commissioner for Refugees (UNHCR) has so far registered 32,000 new arrivals this year on top of the 126,000 Somalis already living in refugee camps in Kenya. The aim of the Commission's assistance is to support activities covering the basic needs of the new Somali refugees (shelter, food, basic health services, sanitation).

And the UN is trying to stop the rush to war:

A European Union envoy plans to fly to Somalia to promote peace talks after weeks of saber rattling by the besieged government and an advancing Islamic movement.

But with troops on the move, suspected terrorists emerging as leaders and foreign fighters pouring into the country, only masterful diplomacy and some arm twisting will get both sides to back away from the brink of war for very long.

Louis Michel, the European commissioner for development and aid, will try to get the two sides to stop fighting and commit to high-level peace talks, according to an EU statement released Tuesday.

The government, supported by troops from neighboring Ethiopia, holds only a small area around the central town of Baidoa. The Islamic militias control the capital, Mogadishu, but have also fanned out across most of southern Somalia.

The U.N.-backed secular government has rejected religious rule for Somalia, while the Muslim leaders have insisted on an Islamic government.

FP: How much of the country is controlled by the Council of Islamic Courts versus the Transitional Federal Government?

KM: The Transitional Federal Government (TFG) controls almost no territory. It holds the provisional capital of Baidoa, barely, and some of the hinterland between Baidoa and Ethiopia. The Courts now control all of Southern Somalia, from the Kenyan border to Mogadishu up to the central Somali town of Galcaio. North of that, the nonsecessionist semiautonomous state of Puntland has yet to join the Courts. So if you include the secessionist state of Somaliland in the northwest, the Courts control more than 50 percent of Somali territory.

FP: Are the Courts controlled by al Qaeda?

KM: No. Absolutely not. There is a legitimate debate over whether a small number of leaders in the Islamic Courts have linkages with a small number of leaders from al Qaeda. That’s not the same as saying that the two are in a deeply intrinsic partnership. The problem that the Courts face is that they are not by any stretch a unified movement. It’s an umbrella group that includes moderates, hard-line salafists, and jihadists. And a small number of jihadists can do an enormous amount of damage and can bring in elements from outside that create a whole new level of security problems. FP: How serious of a humanitarian crisis would ensue if war broke out, something along the scale of Darfur?

KM: There’s already a very serious humanitarian crisis in Somalia and parts of Ethiopia and Kenya due to the heavy flooding that has occurred there. In Somalia alone, there are 500,000 people displaced due to the flooding. The humanitarian agencies are facing the perfect storm right now in southern Somalia—impassable roads due to the flooding, armed conflict breaking out between Somalia and Ethiopia which will ground U.N. helicopters once the war starts, and the unspecified threat of jihadist violence directed at any United Nations, Western, or American agency, emanating from Mogadishu. It’s different from Darfur, but the scale is very large. Darfur is a manmade crisis, and it’s an ongoing one that is incredibly difficult to access. In Somalia, for the moment, the biggest crisis is a natural disaster, the flooding. The problem is that access to those in need is complicated by the imminent threat of war, in which humanitarian workers could become the principal targets for small groups of jihadists. So the immediate threat to the 500,000 people who’ve been displaced by the flooding is very serious.

FP: How is involvement by Eritrea and Ethiopia feeding the conflict?

KM: Somalia has become a proxy war in the region. Eritrea is using the Islamic Courts to try to bog Ethiopia down in a quagmire. They have provided arms and training to the Courts. Meanwhile, Ethiopia is involved in Somalia and has troops there, in large part because it views the rise of the Courts as a very dangerous security threat on a number of levels. One is the prospect of having a radical Islamist movement controlling Somalia. Ethiopia is country which splits roughly 50-50 between Muslims and Christians and doesn’t want a radical Islamist movement on its borders. More immediately, the Courts have made claims to Somali-inhabited territory in eastern Ethiopia and northern Kenya. This is unacceptable to Ethiopia. As long as the Courts are making these claims, Ethiopia will view their ascendance to power as a security threat.