USS Enterprise (CV-6) was the seventh ship to bear that name in the United States Navy.

The first Enterprise in the Navy was a British sloop, captured by "Col. B. Arnold ". The second was a schooner, as was the third. The third Enterprise fought privateers, pirates and captured or defeated Tripolitan ships, as well as seeing action in the War of 1812. Number Four was also a schooner, but had a quieter time than number Three. The fifth Enterprise, a bark-rigged screw sloop-of-war engaged in various surveys and showed the flag. The sixth was, well, "...a motorboat, serv[ing] in a noncommissioned status in the 2d Naval District during World War I." 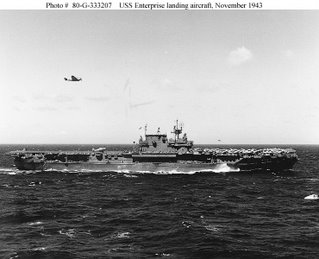 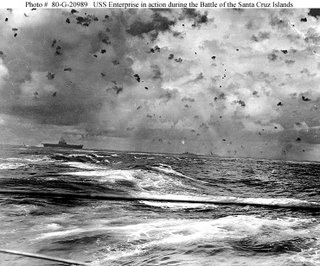 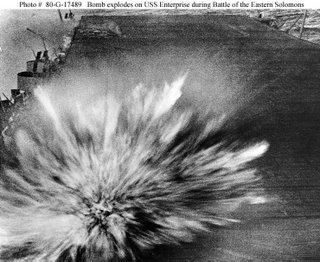 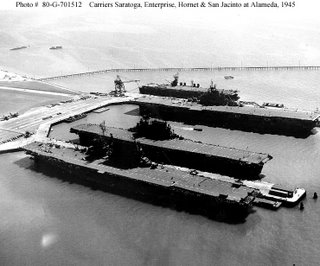 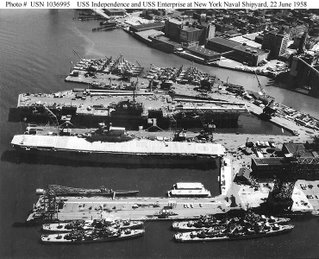 But number seven? She was a biggie. Some background here:

USS Enterprise, a 19,800-ton Yorktown class aircraft carrier, was built at Newport News, Virginia. Commissioned in May 1938, she made a shakedown cruise to South America, then operated in the Caribbean. In April 1939, Enterprise was ordered to the Pacific, where she was to play an unparalleled role in the great sea war that began with Japan's 7 December 1941 attack on Pearl Harbor.

At the time of that raid, Enterprise was at sea. On 10 December, her planes sank a Japanese submarine, the first of many enemy ships that would fall victim to her air group. Later in December, she participated in the abortive Wake Island relief expedition. In February 1942, after escorting convoys to the South Pacific, Enterprise attacked Japanese positions in the Marshalls. During the following three months, she hit Wake and Marcus islands, covered the Doolittle raid on Japan and was en route to the South Pacific when the Battle of the Coral Sea took place in early May.

In June 1942, Enterprise played a vital role in the Battle of Midway, in which her planes sank or helped sink three Japanese aircraft carriers and a cruiser. She was next involved in the Solomons Campaign, including the Guadalcanal landings in early August, the Battle of the Eastern Solomons later in that month and the Battle of the Santa Cruz Islands in October. Badly hit by Japanese bombs in August and October, Enterprise was the only available fleet carrier in the area in November and, despite her damaged condition, launched her air group against enemy ships during the climactic Naval Battle of Guadalcanal. Remaining in the Solomons area into the Spring of 1943, she received the Presidential Unit Citation for her exploits there.

In late 1943 and early 1944 Enterprise participated in the Gilberts and Marshalls invasions and in attacks on Japanese bases in the Central and Southern Pacific. In June and July, she took part in the Marianas operation and the Battle of the Philippine Sea. From August to December, her planes joined in more raids and again engaged enemy ships during the Battle of Leyte Gulf in late October. At the end of 1944 Enterprise received a special night operations air group, with which she took part in the Luzon campaign, strikes in the South China Sea, the Iwo Jima invasion, raids on the Japanese home islands and the Okinawa campaign. She was repaired locally for bomb damage received on 13 March 1945 and Kamikaze damage on 11 April, but had to the return to the U.S. after being badly hit by another Kamikaze on 14 May.

Of the more than twenty major actions of the Pacific War, Enterprise engaged in all but two. Her planes and guns downed 911 enemy planes; her bombers sank 71 ships, and damaged or destroyed 192 more. Her presence inspired both pride and fear: pride in her still unmatched combat record, and fear in the knowledge that Enterprise and hard fighting were never far apart.

The most decorated ship of the Second World War, Enterprise changed the very course of a war she seemed to have been expressly created for.

In this first year of war, Enterprise and the other ships of the Pacific Fleet faced nearly overwhelming odds regularly. At Midway, Enterprise and her sister ships Hornet - which had never directly engaged the enemy before - and Yorktown - hastily patched up after being struck by an enemy bomb in the Coral Sea battle - squared off against four battle-hardened Japanese carriers ... and won. At Santa Cruz, Hornet and Enterprise - just two carriers now - again engaged four of the enemy's and inflicted such devastating losses on Japan's naval aviators that over a year would pass before Japan's carriers could once again challenge the American fleet.

Over the course of the year, the Big E was struck six times by Japanese bombs, and more than 300 of her men were killed or wounded as a result. Enterprise Air Group and Air Group Ten, flying from Enterprise's deck the first eighteen months of the war, suffered heavy losses as they faced the best of Japan's fighting forces. One by one, the other prewar carriers of the Pacific fleet were lost in battle, or damaged and forced to withdraw for repair. Lexington CV-2 was lost in May, and Yorktown less than a month later. On the last day of August, Saratoga CV-3 absorbed her second torpedo of the year and was forced to retire to Pearl Harbor. Wasp CV-7, struck by three torpedoes on September 16, was not so lucky.

Finally, on the morning of October 26, as Hornet burned just over the horizon, Enterprise became the last operational US carrier in the Pacific. A bold sign appeared in the hangar deck - "Enterprise vs. Japan" - reflecting both the desperate nature of the situation, and the resolve of Enterprise's men. Not until December 5, when the repaired Saratoga arrived at Noumea, would the men in Enterprise see another friendly flattop.

Offer up a salute to the brave crews of CV-6.

As discussions begin over the naming of a new aircraft carrier to be completed after the decommissioning of the current USS Enterprise (CVN-65), it is hard to imagine a prouder heritage than another generation of sailors crewing a new Enterprise.

Those pictures? From here and here. It's worth a visit to those sites, which tell the tale of the bomb exploding on the deck of Enterprise and much more. From the top:

Landing aircraft while supporting the Gilberts Operation, 22 November 1943.
A TBM "Avenger" torpedo plane is on the flight deck, aft, while another is flying overhead.

Battle of the Eastern Solomons, August 1942

A Japanese bomb exploding on the flight deck of USS Enterprise (CV-6), just aft of the island, on 24 August 1942.
Note: According to the original photo caption, this explosion killed the photographer, Photographer's Mate 3rd Class Robert F. Read. However, Morison's "History of U.S. Naval Operations in World War II" (volume 5, page 97) states that Read was killed by the bomb that had earlier hit the after starboard 5"/38 gun gallery, which can be seen burning in the upper left. Morison further states that the bomb seen here exploded with a low order detonation, inflicting only minor damage.

Awaiting disposal at the New York Naval Shipyard on 22 June 1958. She was sold for scrapping ten days later, on 2 July.
USS Independence (CVA-62) is fitting out on the opposite side of the pier.
Ships visible in the left foreground include (from front): USS DeLong (DE-684), USS Coates (DE-685) and USS Hoe (SS-258). Ten other destroyers are also present, as is a "Liberty" type ship.
The Schaefer brewery is visible in the center background.