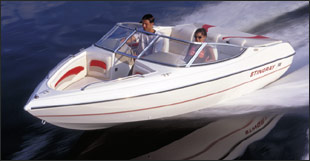 Like licensing car drivers, but as a security assist for keeping tabs on recreational boaters, as set forth here:

Guard Commandant Thad Allen said the potential for a terrorist attack launched from small boats means that states and the Coast Guard must cooperate better to watch who is on America's waterways. Though he doesn't yet have details or formal recommendations for how a national permit system would work, he said he'd like to see boating licenses be similar to motor vehicle driver's licenses.

Forty-four states now require some kind of mandatory education before boaters can get on the water, but just one - Alabama - oversees boaters with the same rigor it applies to motorists, according to the National Association of State Boating Law Administrators (NASBLA) of Lexington, Ky.
***
errorism experts point to other ways small boats potentially could assist in attacks - for example, a speedboat could deposit saboteurs at the outlet pipes of a nuclear power plant, or hijackers aboard a cruise ship. In a nightmare scenario, suicide bombers in a crowded harbor could use small watercraft to detonate a tanker carrying ultra-volatile liquefied natural gas, causing a powerful explosion that could kill thousands.

The opposition to the idea says:

"Mandatory education is one thing. We're not opposed to having people take a course. But we wouldn't want to see it turn into a license that could be restricted or taken away," said Chris Edmonston, director of boating safety for the Boat Owners Association of The United States, commonly known as Boat U.S, based in Alexandria, Va. The driver's license analogy was not a good start, he said.

"Driving a car is considered a privilege conferred by the state, but boating is considered a right. It gets back to that 'life, liberty and the pursuit of happiness' sort of thing," Edmonston said.

Boating is a right? Must be in an Amendment to the Constitution that I have forgotten about.

And, given some of the drunken louts I have observed "operating" speed boats and personal watercraft, a license that can be taken away strikes me as a great idea.
Posted by Mark Tempest at 12/20/2006 09:32:00 AM