Death from above - by autogyro? 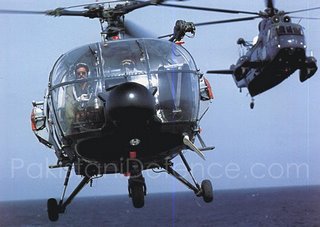 Pakistan intelligence agencies last evening claimed to have unearthed a plan by banned militant organisations to hijack helicopters used by courier services and welfare organisations, to carry out terrorist acts in the country.

Quoting the intelligence reports, the paper further said that the banned militant groups have "formed a squad tasked with hijacking a helicopter". They also warn that militants continue to plan to abduct and kill senior government officials, along the lines of incidents reported in Iraq.

According to sources, copies of the reports have been sent to Pakistan Defence Secretary, who has directed the CAA, MSA, welfare organisations and courier companies to step up security around their helicopters

Info on the Pakistan Maritime Security Agency found in this - 1 destroyer and 6 other vessels. Photo shows a couple of military aircraft flown by Pakistan, including the Alouette III and the Sea King Mk45. More info on Pakistan military aviation here. No reports on where the pilots might come from.