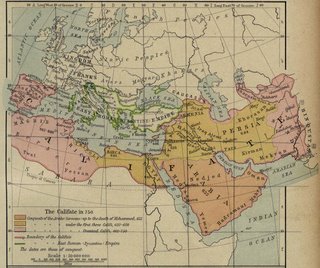 Two worth reading:
From Lex:

I’ve been hearing a lot of talk lately about how people are tired of the war, tired of looking at the scenes of destruction on TV, tired of the flag-draped caskets and what they represent in human costs, tired of the expense and frankly, tired of talking about it. We want to move on, we want it over, we want to change the channel, talk about something else. Get back to full-time Britney and her sartorial choices, the next news blitz about the next telegenic blonde co-ed that goes missing, single-payer health care and Our Crumbling Infrastructure.

People are war-weary, and that’s only natural - no one likes a long, protracted fight. The lines get blurry, goals are re-defined, eventually someone you care about will get caught behaving very badly, casting doubt on the rightness of the entire enterprise. There is so very much misery. But war weariness can be a dangerous indulgence. Partly for political reasons, people have been lulled into thinking that the choice on whether or not to continue the fight is a simple one. It isn’t.

Political Correctness is the new Black Death. All the topics that can't be discussed are part of the pandemic that's killing America. Feminists so pin-headed they lend their political support to anti-semitic death merchants whose religion defines their sex in terms of slavery. Academics who abandon their subject matter expertise for political rants in support of forces that would exterminate them without a second thought. Minority rights activists who sup with traitors on a daily basis while they demand the extension of exceptional American privileges to those who would rape their wives, subjugate their children, clap them in chains, and entirely eliminate the gravy train on which they have feasted for a generation.

See the map of the Caliphate as it was in 750? The True Believers have a goal and can overcome those with short attention spans and a fear of offending.

UPDATE: Spook86 points to this

The American people need to prepare for a long-duration war against radical Muslims who are set to fight for 50 to 100 years to create an Islamist state in the region, a top Pentagon strategist in the war on terror says.
***
Gen. Schissler said he is concerned that Washington politics is weakening the will of the nation.
"I don't care about the politics. I care about people understanding the facts of what's our enemy is thinking about, what's our strategy to defeat them, and for [Americans] to understand that it will take a long fight, mostly because our enemy is committed to the long fight," he said. "They're absolutely committed to the 50-, 100-year plan."
"One of my concerns is how to maintain the American will, the public will over that duration," he said.
***
Al Qaeda's ultimate goal, the general said, is to set up an extremist "caliphate" stretching from western North Africa through southern Europe and along a path through the Middle East to Central and Southeast Asia.
"We're pretty convinced that the extremists are not ever going to give up the fight," Gen. Schissler said, noting that they are driven by the concept of jihad that makes it a religious duty to wage terrorist war.