It was piracy, crew of ship "rescued" by Tamil Tigers say 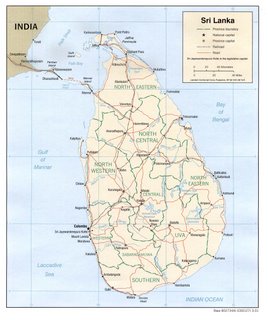 The crew of a Jordanian ship that ran aground near the rebel-controlled territory off the island's coast, today accused the Tamil Tigers of forcing them to abandon the vessel carrying 14,000 tonnes of Indian rice and risking their lives.

The crew of the Farah III said the Liberation Tigers of Tamil Eelam fired four times to force them out of the vessel after failing to explode it in choppy seas three days ago.

Skipper R Abdullah told reporters here after arriving from the rebel-held north of the island to speak of their harrowing experience at the hands of the Tigers who arrived in six boats and boarded the vessel.

"First they tried to set up a bomb and explode the anchor cable and when it failed they ordered us to weigh anchor," Abdullah told reporters here. He alleged the Tigers dismantled and removed all radio communication equipment and radar from the vessel.

He rejected Tiger claims that they were actually helping the crew who had developed engine trouble after setting from a South Indian port on 15 December.

"They did not try to help," Abdullah said. "But they opened fire four times to scare my crew and force us into smaller boats," he said.

Some background here, though I have left out most of the various efforts of the LTTE disinformation campaign to couch this thuggery as a "rescue."
Posted by Mark Tempest at 12/26/2006 08:24:00 AM