Task Force 38 and the Typhoon 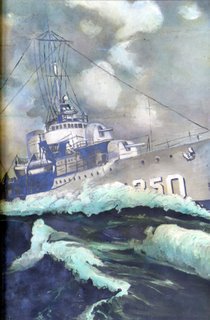 Shortly before noon, steering control went out on the bridge, but was regained in the steering motor room in a few minutes. The engine telegraphs went out for awhile, but were also reported operating satisfactorily in a few minutes. The chief engineer . . . . reported at this time that the forward fireroom blowers had stopped because of heavy amounts of water being taken down the intakes, The after fire room was reported as having taken over, and it is believed that all bells were properly answered...

At this tine the ship took several deep rolls because of high velocity wind gusts. I estimated the rolls to have been about 70 degrees. At one time the Junior Officer of the Deck was catapulted from the port side of the pilot house completely through the air to the upper portion of the starboard side of the pilot house...

Shortly after twelve 'o'clock the ship withstood what I estimated to be the worst punishment any storm could offer. She had rolled about 70 degrees and righted herself just as soon as the wind gust reduced a bit . . . . Just at this point the wind velocity increased to an unbelievable high point which I estimated at 110 knots. The force of this wind laid the ship steadily over on her starboard side, and held her down in the water until the seas came flowing into the pilot house itself. The ship remained over on her side (starboard) at an angle of 80 degrees or more as the water flooded into her upper structures. I remained on the port wing of the bridge until the water flooded up to me, and I stepped off into the water as the ship rolled over on her way down. The suction effect of the hull was felt, but it was not very strong. Shortly after, I felt the concussion of the boilers exploding under water. The effect was not very strong, and caused me no ill effects. I concentrated my efforts thereafter to trying to keep alive in the mountainous seas which pounded us."