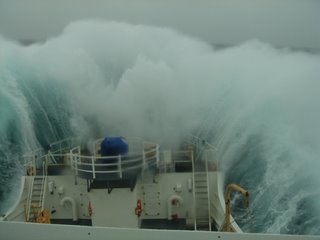 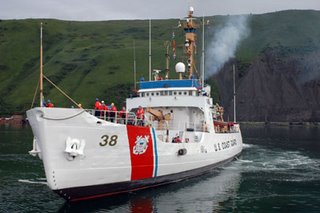 In fact, she is, for now, the oldest ship in the U.S. Coast Guard - USCGC Storis. Storis was completed at the beginning of U.S. involvement in WWII and patroled the North Atlantic, she discovered the Northwest Passage and still serves the people of Alaska and the United States:

...The Storis was built by the Toledo Shipbuilding Company, Toledo, Ohio and commissioned in 1942. The Storis saw action in World War II in the North Atlantic while assigned to prevent the establishment of Nazi weather stations in Greenland. In 1948, the Storis changed homeport to Juneau where it supplied medical treatment to native villages and surveyed uncharted waters in the Arctic. The Storis and two other cutters, now decommissioned, completed a historic transit of the Northwest Passage and circumnavigation of the North American Continent in July of 1957. Soon after, the Storis was transferred to its present homeport here. The Storis continues to patrol the Gulf of Alaska and the Bering Sea, proudly bearing its gold "38" hull numbers, which is a distinction given only to the oldest cutter in the fleet. (Official Coast Guard photo by Petty Officer Christopher D. McLaughlin)

More on the Northwest Passage:

On July 1, 1957, STORIS departed in company with the Coast Guard Cutters BRAMBLE and SPAR to search for a deep draft channel through the Arctic Ocean and to collect hydrographic information. This historic transit ended a 450-year search for the Northwest Passage – a route for large ships across the top of North America.(source)

The Storis and her crew continue serving the peoples of the remote corners of Alaska... 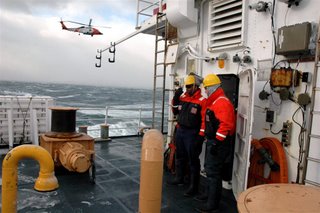 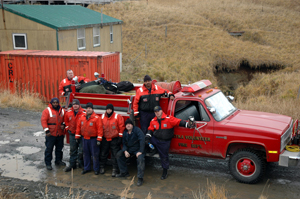 Crewmembers of the Coast Guard Cutter Storis stand proudly in front of Atka's fire truck. They were able to repair the vehicle's damaged water pump and restore the village's only means to put out a large fire. (Official Coast Guard photo by Petty Officer Eric J. Chandler)(source)

USCGC Storis is soon to be retired as the 50th anniversary of her historic Northwest Passage exploration nears, see here, for a complete description of her last humanitarian mission.

Thanks to the all those who have crewed Storis and a salute to a fine ship as she ends her career.