Some boats should never go to sea 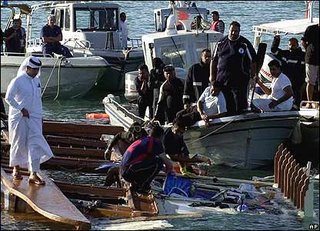 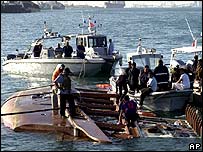 Instability, poor safety equipment and an unqualified crew led to nine Britons being killed when a pleasure boat capsized in Bahrain, a court has heard.

Fifteen Britons were among the 58 killed when the Al Dana dhow capsized in March...
***
The coroner, Alison Thompson, cited a report into the disaster which found the boat had been "dramatically altered" with a superstructure built on to the traditional dhow, destabilising it.

Air conditioning units, a kitchen, fridges and a generator had all been added.

She said the 130 people on board to celebrate the end of some work on a major building project had contributed to the boat's instability.

The inquest also heard escape doors on the lower deck were locked and lifebuoys were tied to handrails with nylon ropes.

And the understated conclusion:

"It is now clear that this vessel should never have left the quayside."