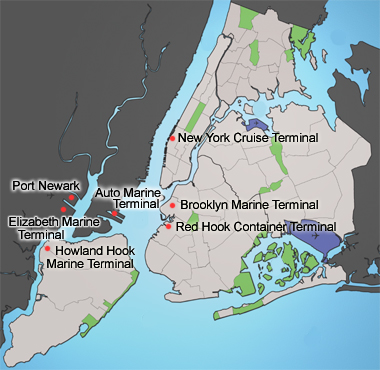 Reported here, the not too surprising conclusion that the Port of New York and New Jersy "is vulnerable to attack." Nor is it surprsing that the recommendaions to fix the problems tend to involve nationalizing the port security issue and having more federal dollars involved.

The Port Security Task Force released a 22-page report Monday with five recommendations that would reduce the vulnerabilities and security risks at all of the nation's ports, officials said.

The recommendations, some of which may require congressional approval, include establishing a per-container port-user fee to pay for security and appointing a national port and cargo security director.
***
Other recommendations from the 20-member task force, which was made up of business executives and Port Authority members, included:

- Establishing response and recovery plans in the event of a port attack.

To drive home the point, Richard Canas, the state's homeland security director, pointed to a ship at the seaport that was unloading containers.

"We don't know what's in any of those containers," he told reporters.