Indian Navy to go abroad - even to Guam 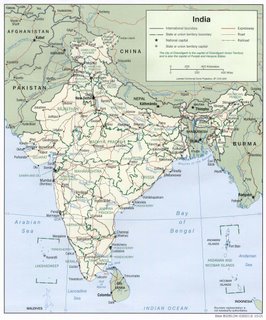 Tired of being the home team in Naval war games, the Indian Navy may be heading to sail some news seas, as reported here:

Six Indian warships, including Delhi-class and Rajput-class guided missile destroyers, will be deployed towards 'east' from March onwards. Apart from 'touching' Japan, South Korea and China, they will take part in the Indo-US 'Malabar' exercise off Guam in the western Pacific Ocean in April, said Admiral Mehta.

The same warships will undertake combat exercises, code-named 'Indra', with Russian warships off Vladivostok. Then, in August-September, another group will head for the Gulf region and beyond, rounding it off with Indo-French 'Varuna' war games off the Red Sea.

This unprecedented overseas deployment by Navy blends in perfectly with its philosophy of building 'interoperability' and 'bridges of friendship' with foreign navies. "It will help if we need to operate against a common enemy in the future," said a senior officer.

The Navy, which now increasingly acts as a diplomatic instrument to further the country's political and geo-strategic objectives, will also use the opportunity to project power much beyond Indian shores.

Update: Also worthy of note is the Indian increase in its navy's "energy secuirty" role, as set out here:

The Indian Navy is ramping its force and surveillance levels as it gears to protect the country's energy security assets in a wide swathe ranging from the Sakhalin Islands off Russia's east coast to South America.

And, in shaping what in military parlance is termed a "maritime battlefield" the navy is firming interoperability capabilities with its counterparts from the US, Britain, France, and Russia, as also neighbouring and Southeast Asian countries, Mehta told reporters ahead of the Navy Day celebrations on Monday.

Simultaneously, the navy has also evolved a joint war doctrine involving the Indian Army and the Indian Air Force to integrate the operations of all three wings, he added.

"We are an India-centric force. We are not only looking at countering threats but to protect the country's economic and energy interests," Mehta explained.