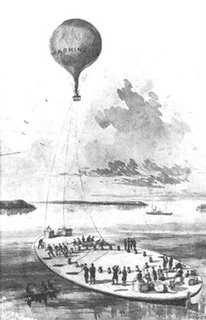 Before the Wright brothers flew their heavier than air craft at Kitty Hawk, military forces were trying to exploit the combination of ships and flying machines. In the U. S. Civil War, the Union forces used balloon barges to get peek behind Rebel lines:

...[D]uring the American Civil War, about the time of the Peninsula Campaign, gas-filled balloons were being used to perform reconnaissance on Confederate positions, the battles turned inland into the heavily forested areas of the Peninsula where balloons could not travel. A coal barge, the George Washington Parke Custis, was cleared of all deck rigging to accommodate the gas generators and apparatus of balloons. From the GWP Prof. Thaddeus S. C. Lowe, Chief Aeronaut of the Union Army Balloon Corps, made his first ascents over the Potomac River and telegraphed claims of the success of the first aerial venture ever made from a water-borne vessel. Other barges were converted to assist with the other military balloons transported about the eastern waterways. It is only fair to point out in deference to modern aircraft carriers that none of these Civil War crafts had ever taken to the high seas.(source)

In the next 40 years, great minds turned to aerial flight and numerous unsuccessful prototypes were experimented with until the Wrights flew at Kitty Hawk.

One American inventor, Samuel Langley tested some of his aircraft flight from a floating platform parked in the Potomac River and failed in a rather public manner just before the Wright brothers succeeded. Though Langley was unsuccessful in this phase part of his career, he was very inspirational to those who followed his work. 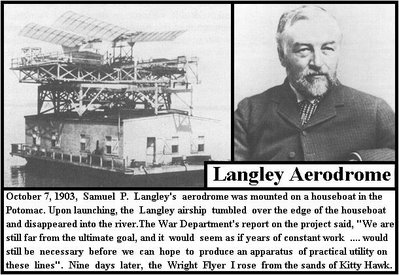 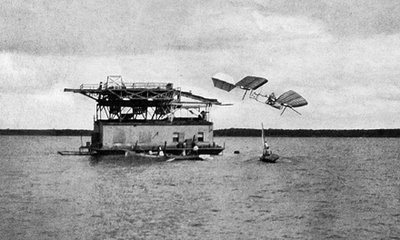 Before the creation of the aircraft carrier many people had a vision of launching and recovering aircraft from a "floating airport:"

As heavier-than-air aircraft developed in the early 20th century various navies began to take an interest in their potential use as scouts for their big gun warships. In 1909 the French inventor Clement Ader published in his book "L'Aviation Militaire" the description of a ship to operate airplanes at sea, with a flat flight deck, an island superstructure, deck elevators and a hangar bay.[4] That year the US Naval Attache in Paris sent a report on his observations.[5](source) 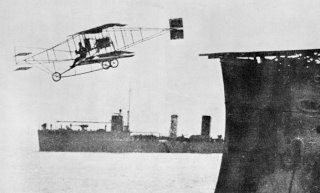 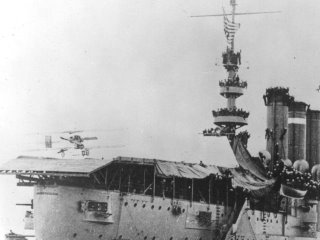 A number of experimental flights were made to test the concept. Eugene Ely was the first pilot to launch from a stationary ship in November 1910. He took off from a structure fixed over the forecastle of the US armored cruiser USS Birmingham at Hampton Roads, Virginia and landed nearby on Willoughby Spit after some five minutes in the air.

On January 18, 1911 he became the first pilot to land on a stationary ship. He took off from the Tanforan racetrack and landed on a similar temporary structure on the aft of USS Pennsylvania anchored at the San Francisco waterfront -the improvised braking system of sandbags and ropes led directly to the arrestor hook and wires ... His aircraft was then turned around and he was able to take off again.
***
Commander Charles Samson, RN, became the first airman to take off from a moving warship on May 2, 1912. He took off in a Short S27 from the battleship HMS Hibernia while she steamed at 10.5 knots (19 km/h) during the Royal Fleet Review at Weymouth.

HMS Ark Royal was arguably the first modern aircraft carrier. She was originally laid down as a merchant ship, but was converted on the building stocks to be a hybrid airplane/ seaplane carrier. Launched in 1914, she served in the Dardanelles campaign and throughout World War I.

The first strike from a carrier against a land target took place on July 19, 1918. Seven Sopwith Camels launched from HMS Furious attacked the German Zeppelin base at Tondern, with two 50 lb bombs each. Several airships and balloons were destroyed, but as the carrier had no method of recovering the aircraft safely, two of the pilots ditched their aircraft in the sea alongside the carrier while the others headed for neutral Denmark.(source)

Understand that these planes were carried on ships for use in reconnaissance or light attacks. Mostly these were float planes which may have launched from a battleship or cruiser, but which were retrieved from the water by crane. Landing and taking off from a moving ship were ideas whose time had not yet come. 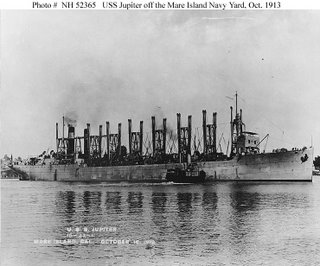 Then came Langley. Langley was related to the ill-fated USS Cyclops in that it was the third ship in that series and originally named USS Jupiter:

USS Langley, a 11,500-ton aircraft carrier, was converted from the collier USS Jupiter (Collier # 3) beginning in 1920. Commissioned in March 1922, Langley was the U.S. Navy's first aircraft carrier. In October-November 1922, she launched, recovered and catapulted her first aircraft during initial operations in the Atlantic and Caribbean areas. 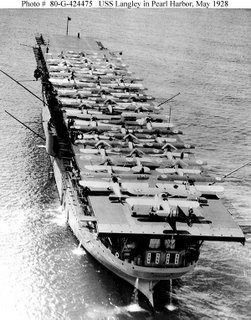 Transferred to the Pacific in 1924, Langley was the platform from which Naval Aviators, guided by Captain Joseph M. Reeves, undertook the development of carrier operating techniques and tactics that were essential to victory in World War II. Though newer, larger and faster aircraft carriers arrived in the fleet in the later 1920s, the old "Covered Wagon" remained an operational carrier until October 1936, when she began conversion to a seaplane tender.

Langley was electrically powered and suffered from a speed limitation of 15 knots. 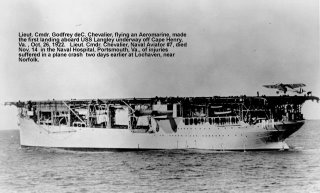 Navy carrier, Langley was the scene of numerous momentous events. On 17 October 1922 Lt. Virgil C. Griffin piloted the first plane, a VE7-SF, launched from her decks. Though this was not the first time an airplane had taken off from a ship, and though Langley was not the first ship with an installed flight-deck, this one launching was of monumental importance to the modern U.S. Navy. The era of the aircraft carrier was born introducing into the Navy what was to become the vanguard of its forces in the future. With Langley underway 9 days later, Lt. Comdr. G. DeC. Chevalier made the first landing in an Aeromarine. On 18 November Commander Whiting, at the controls of a PT, was the first aviator to be catapulted from a carrier's deck. (source) 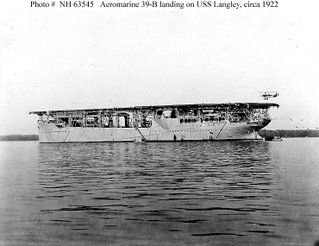 Some interesting history of LCDR Chevalier here. The man was a true hero, and not just for landing on Langley... 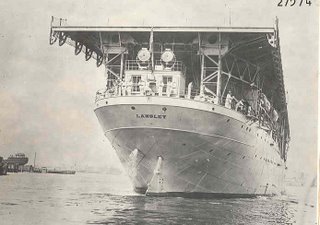 View of the stern of Langley (CV 1), the U.S. Navy's first aircraft carrier. The structure atop which the searchlights sit originally housed homing pigeons, which were commonly used by aircraft in the days before radio to send messages to their home base. However, it was soon realized that they were useless aboard ship, for when she moved, the birds became lost. The loft was then converted into the Executive Officer's Quarters!

Langley's carrier career lasted long enough to do the fleet a great deal of good:

By 15 January 1923 Langley had begun flight operations and tests in the Caribbean for carrier landings. In June she steamed to Washington, D.C., to give a demonstration at a flying exhibition before civil and military dignitaries. She arrived Norfolk 13 June and commenced training along the Atlantic coast and Caribbean which carried her through the end of the gear. In 1924 Langley participated in more maneuvers and exhibitions, and spent the summer at Norfolk for repairs and alterations, she departed for the west coast late in the year and arrived San Diego 29 November to join the Pacific Battle Fleet. For the next 12 years she operated off the California coast and Hawaii engaged in training fleet units, experimentation, pilot training, and tactical-fleet problems. On 25 October 1936 she put into Mare Island Navy Yard, Calif., for overhaul and conversion to a seaplane tender. Though her career as a carrier had ended, her well-trained pilots proved invaluable to the next two carriers, USS Lexington (CV-2) and USS Saratoga (CV-3).

Of course the pilots of Lexington and Saratoga were the leaders of WWII naval aviation.

Converted to a sea plane tender, she took on a very different look: 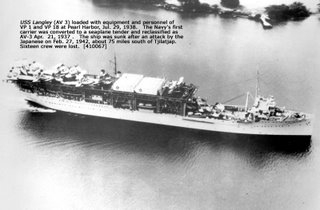 Langley completed conversion 26 February 1937 and was reclassified AV-3 on 11 April she was assigned to Aircraft Scouting Force and commenced her tending operations out of Seattle, Sitka, Pearl Harbor, and San Diego. She departed for a brief deployment with the Atlantic Fleet from 1 February to 10 July 1939, and then steamed to assume her duties with the Pacific fleet at Manila arriving 24 September.

At the outbreak of World War II, Langley was anchored off Cavite, Philippine Islands. She departed 8 December and proceeded to Balikpapan, Borneo, and Darwin, Australia, where she arrived 1 January 1942. Until 11 January Langley assisted the Royal Australian Air Force (RAAF) in running antisubmarine patrols out of Darwin. She was then assigned to American-British-Dutch-Australian forces assembling in Indonesia to challenge the Japanese thrust in that direction. She departed Fremantle, Australia, 22 February in convoy, and left the convoy 5 days later to deliver 32 P-40s to Tjilatjap, Java. 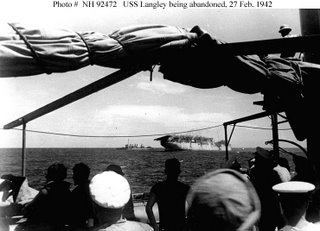 Early in the morning 27 February 1942, Langley rendezvoused with her antisubmarine screen, destroyers USS Whipple (DD-217) and USS Edsall (DD-219). At 1140 nine twin-engine enemy bombers attacked her. The first and second Japanese strikes were unsuccessful; but during the third Langley took five hits. Aircraft topside burst into flames, steering was impaired, and the ship took a 10 degree list to port. Unable to negotiate the narrow mouth of Tjilatjap Harbor, Langley went dead in the water as in-rushing water flooded her main motors. At 1332 the order to abandon ship was passed. The escorting destroyers fired nine 4-inch shells and two torpedoes into the old tender to insure her sinking. She went down about 75 miles south of Tjilatjap with a loss of 16.

Although she is long gone, some of her crew survived long enough to meet with modern carrier sailors from USS Ronald Reagan (CVN-76). Photos of a 103 year old Langley crewman at such a meeting here. 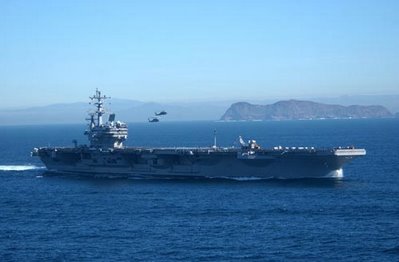 UPDATE: Let me commend this site to you for a thorough look at aircraft carrier history. Especially good is the section (pdf) titled "Langley, Lex And Sara." And below are some examples of early aricraft carriers, the German seaplane carrier Stutttgart and the British Royal Navy carrier from 1918 (not really ready until 1924), HMS Eagle (it's the one that looks like an aircraft carrier):