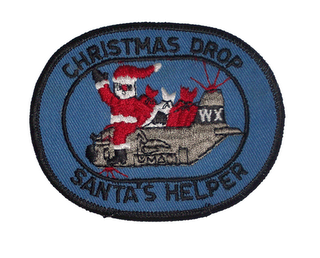 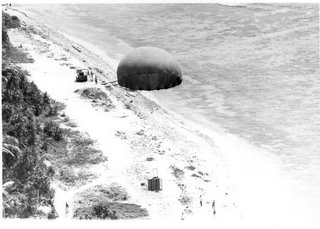 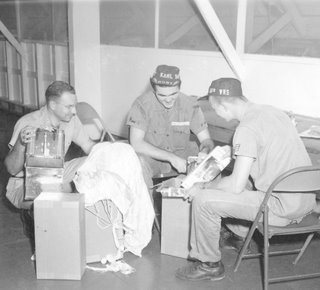 Flying over some remote Pacific islands in the years after WWII, some U. S. Air Force crews started the "The world's longest running humanitarian airdrop," becoming "Santa's helpers" along the way. As the Air Weather Reconnaisance Association's website tells the tale here:

For our December update we have to think Christmas. Now for myself and hundreds of other weather reconnaissance crew members, this means Christmas Drop. I'm still trying to find a definite source who was actually there, but the bulk of evidence says the tradition was started by a 54th WRS crew flying their WB-29 south of Guam around Christmas Day of 1952. They passed over the atoll of Kapingamarangi, a circular group of islands about 600 miles south of Guam. As they flew over one Island, they spotted a group of islanders waving at them, and the holiday spirit took over. The crew gathered up food and other items they had on the plane, and placed them in a container (possibly the box that held a dropsonde) and attached a small dropsonde parachute. They circled back around and dropped the makeshift gift to the islanders. A wonderful tradition was born that continues to this day. The 54 WRS, along with other military and civilian organizations, coordinated the collection of needed items and dropped them to remote islands every year until the squadron was deactivated in 1987. Since then, the 374th Airlift Wing has taken over, sending a TDY crew and C-130 aircraft to Guam to pick up and deliver hundreds of boxes each year. I've always wondered if it's true that the folks on Kapingamarangi actually built a B-29 out of palm fronds to try and lure that first plane to come back? Probably not, but it made a great reconnaissance legend....

More recently, a listing of things to go in the boxes to be dropped and where it goes:

The islands selected for the drop are the most remote, said Bruce Best, manager of the University of Guam’s PEACESAT Network center, a satellite communications hub for Micronesia that’s helped coordinate the Christmas Drop for more than 20 years.

“There are no drops in any of the district centers,” he said. “They don’t have any drops where Continental [Airlines] goes … If it has a school or a dispensary we try to make sure it gets a drop.”

During the past two years typhoons and other mission priorities have prevented the group from dropping to all the targeted islands.

Some islands have seen their food supplies destroyed by typhoons, and some “haven’t had a boat in five months because of price of fuel and lack of maintenance on boats,” Best said. “So the Christmas Drop is big time. I’m hoping that some of the ones that are real needy get a drop.”
***
The islanders especially appreciate fishing gear, masks, fins and snorkels, so they can have the tools needed to feed themselves, he said.

“That makes a lot of food throughout the year,” Best said. “And you just can’t get fishing hooks… out there.”

While 1952 is the commonly accepted year of the first Christmas Drop, John Treiber, 36th Air Expeditionary Wing historian, isn’t so sure.
***
A story Andersen’s newspaper published in 1957 states the drop began in 1947, when wives of 514th Recon Squadron crewmembers put together packages of clothes, books and other goodies to drop to islanders their husbands had reported seeing on flights over the vast region.

Since 1952, however, the drop has taken place every year — even during the height of the Vietnam War — except for 1973, when it was canceled due to a global oil crisis.

Rotary Clubs on Guam pitch in:

Under the direction of Rotary Club of Guam President Diane Keller, in the spirit of "Leading The Way", we have organized all Guam Clubs (Northern, Sunrise, Tumon Bay) and the Saipan Club in a joint effort to support this mission under one banner "Pacific Basin Rotary Clubs". Total donations collected were $9,600. With these generous contributions we were able to purchase (at wholesale prices) medical supplies that act as a first defense to basic medical needs. First Aid kits, pain and fever reducers, bandages, and dental supplies.

Representative members from Rotary Clubs gathered to divide and pack 100 boxes of supplies to be included in 100 larger boxes to be air lifted to 26 of the Marianas islands. The enthusiastic support of neighboring Clubs is a true testament of "Service Above Self". It is our hope to maintain our united effort of Pacific Basin Clubs as a continuing legacy of this humanitarian service."

This year the effort got a push:

The world's longest running humanitarian airdrop had its first "Push" ceremony at Andersen Air Force Base Saturday commemorating the 54th Annual Operation Christmas Drop that reached more than 50 remote Pacific islands.
***
Gen. Douglas H. Owens, 36th Wing commander, led the ceremony that included words of thanks and encouragement from a native of Eauripik, an Outer Yap island, who is now a Petty Officer in the Navy.

"We have no airstrips or major ports on our remote islands," said Petty Officer 2nd Class John Taibemal. "It's a year-long wait for these items, and for most of us it's the only way to obtain new clothes and Christmas gifts."

Operation Christmas Drop is truly a team effort, bringing together volunteers from across Team Andersen, including the 734th Air Mobility Squadron here, crews and aircraft from the 36th Airlift Squadron from Yokota Air Base, Japan, and spirited members of the Guam community.

"This is a wonderful event to be a part of," said Patty Arroyo, Guam radio personality. "Not only are we helping families and communities that really appreciate the assistance, but we show how well the civilian and military communities can work together."

Since 1952, the Christmas Drop operations have delivered more than 800,000 pounds of supplies, according to organizational data.

As noted, a sailor is involved in this year's effort, '06 Christmas Drop extra-special for Yapese sailor. Video of Push here.

It's a great tradition:

Operation Christmas Drop has gone through a number of iterations since it was started in 1952 by the U.S. Air Force's 54th Weather Reconnaissance Squadron. The mission angelically drops 400-pound crates of much-needed supplies from the heavens to families in the region's impoverished islands and territories, and was at one time a private venture, eventually returned to military control. For those involved, it makes for one of the proudest, most fulfilling missions they'll fly.

"Anytime we have the opportunity to share goodwill between the military here and our island friends is just a tremendous thing. And being able to be part of such a long and storied history and tradition that accompanies Operation Christmas Drop is terrific," said Brigadier General Douglas Owens, the commander of the 36th Air Wing at Andersen Air Force Base. And even though the mission has been undertaken for generations at Andersen, for the new commander at the Yigo base, this is his first exposure to it. So while not a combat sortie or assignment that puts his pilots, flight crew, and their fellow airmen directly in harm's way, General Owens says the importance of the mission can't be understated.

"These are training missions for these crews that fly, so they will gain valuable Air Force training as part of their effort," he explained. "In doing so, they'll be able to reach out to those islands that would not otherwise be able to receive the goodwill that we're providing. So in their minds, this is very much a people-helping-people effort, and that's precisely the way we all approach it."

Air Force aircraft flying from Andersen Air Force Base, Guam, are dropping more than 20 tons of donated items to Pacific Islanders throughout Micronesia during the 53rd annual Operation Christmas Drop through Dec. 22.

The mission involves three C-130 Hercules from the 36th Airlift Squadron based at Yokota Air Base, Japan.

Well done, all of you involved in Christmas Drop!