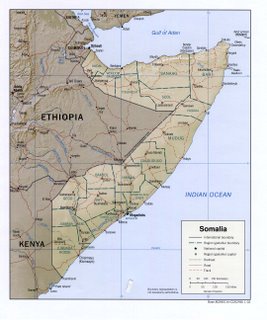 While the Somali Islamic Courts Union seem to have taken piracy off the Somali coast off the board (perhaps because it keeps foreign navies well off the coast?), Daveed Gartenstein-Ross posting at The Counterterrorism Blog has a disturbing report of Iranian Uranium Prospectors in Somalia, which points to his latest Pajamas Media post on Somalia here:

Iran is secretly searching for uranium in war-torn Somalia, according to a confidential United Nations report obtained by Pajamas Media.
***
The report notes that two Iranians were “engaged on matters linked to the exploration of Uranium in exchange for arms” in Dusamareb, Somalia. The arms would be given to the Islamic Courts Union (the ICU), a Taliban-like movement that controls much of Somalia.

The UN report is available for download at the second link.

That the situation in Somalia is developing into another proxy war between the West and Iran should not be surprising. That al Qaeda is involved is a long held belief- see Bill Roggio's report here and Bill's more recent post "Apostate Hell in Somalia" which points to a web video that all but admits the linkage with the Supreme Islamic Courts Council and al Qaeda.

Some background on Somalia here. A grim updater from the International Crisis Group titled "Getting It Wrong In Somalia, Again"here. The ICG solution seems a bit of a pipe dream to me:

It should also invest in a peace process, which means getting involved in promoting a power-sharing deal between the weak transitional government and the council. Rebuilding a government in Somalia is the only viable way to combat the terrorist threat and prevent violent Islamist extremism from expanding. Delicate diplomacy is required to reconstitute this transitional authority as a government of national unity. Only then will the United States help create an effective counterbalance to the Islamists and an eventual partner in the international struggle against terrorism.

I think the idea of negotiating and talking with people stuck in the 14th Century and whose frame of reference includes the reestablishment of the Caliphate ignores some of the problems faced unless there are boots on the ground to establish the conditions for discussion.

Maybe I've misread Barnett, but it seems to me that the "Leviathan" has to set the stage for the "SysAdmin" types, not vice versa.

Without control over all the players, it's hard to incentivize everyone. A lesson we should have learned in Vietnam and are apparently still learning in Iraq.
Posted by Mark Tempest at 12/12/2006 10:12:00 AM