Electricity from the motion of the ocean 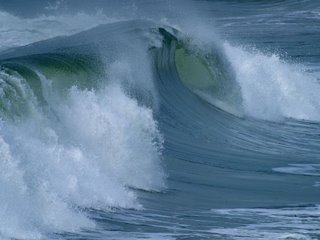 A new technique that makes use of the circular motion of waves to generate electricity is discussed here:

'A wave does not just move up and down,' said Edwards. 'When it moves past it doesn't mean that a lot of water is passing by at the same time. The water actually moves around in a circle, so as well as an up-and-down motion you also get a side-to-side movement. This is why, when you put two objects next to each other in the sea, the gap between them will continually open and close because they are in different wave phases.'

The system uses this phase movement by installing a generator device between two movable walls and harnessing that back-and-forth motion to generate power. Between the three moving walls, piston-like hydraulic pumps convert the horizontal movement into hydraulic pressure which, in turn, powers the generators. These, along with a host of power-conditioning technology, are stored in the device's walls — where they are kept watertight — and produce power that can be linked straight to the power grid via sub-sea power cables.