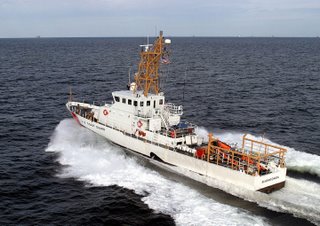 Upon discovering some apparent structural damage in hulls of some boats, the USCG has shut down ops of its 123-foot patrol boats for crew safety reasons, as set out here:

The Coast Guard’s Integrated Deepwater System had originally planned to convert 49 of the service’s 110-foot cutters into 123-foot cutters, intending to increase the vessel’s annual operational hours to 2,500 versus the 110-foot boat standard, which ranges from 1,800 to 2,200 hours. In June 2005, the Coast Guard stopped its conversion process at eight hulls when it determined the converted cutters lacked adequate capabilities to meet their expanded post 9/11 operational requirements.

DHS needs to pony up some more money and buy new boats designed to proper specs. More info on the 123'ers here.

UPDATE: The WAPO plays with the story here:

multibillion-dollar effort to modernize the Coast Guard's fleet has suffered delays, cost increases, design flaws and, most recently, the idling of eight 123-foot patrol boats that were found to be not seaworthy after an $88 million refurbishment.

The sidelining of eight of 10 Miami-based cutters worsens a patrol-boat crisis while the Coast Guard is preparing for an exodus of Cubans that could happen when dictator Fidel Castro is no longer in power, Coast Guard leaders acknowledge.